Nick Cooke, a current Rank Aspire leader, has given us a fantastic roundup of the three day residential at Windermere, the Lake District. This was the second time in six months that the group met as a whole.

Nick is a Health and Wellbeing Coach at Credu, which supports carers and their families in Powys and North Wales. They help carers to both look after their loved ones and take care of themselves as individuals.

Here is Nick’s summary of the residential: 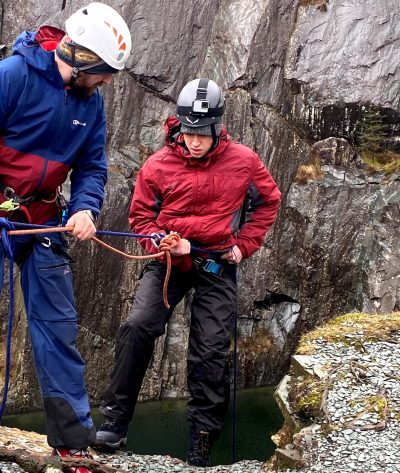 So after a 5 hour drive from South Wales, I arrived at Windermere and walked into the swanky Low Wood Hotel overlooking Lake Windermere. Sounds like something from Game of Thrones!

I was greeted by most of the other Aspire Project leaders and straight away it just felt like a great atmosphere.

Shortly after we did some ice breakers (which are always great) and we were split into groups of three and discussed what we had being doing over the last 6 months and how we felt we had changed during the process. It was nice to catch up with the others straight away and hear more about their experiences. We then did feedback to the whole group.

After a nice meal we came back to the table and used Satori cards, which tell us our leadership style. We’d used these on the Leeds residential back in November, but I was keen to see whether or not I had the same result. It turns out I did (I had a Visionary both times), but this time I had even more cards that would suggest so. Some other the others like Suhail actually had a different result which is really interesting!

Later in the evening we used self-esteem cards. We were each given a pile of cards with positive statements on, then we had to put the card face down in front of the person that we believed it related to. This was such a fantastic exercise to do because when everyone read through the cards they had received you could see their faces light up. I know some of us needed a boost like that.

After we finished, a group of us went for a swim (not in the lake, too cold!) but in the hotel’s indoor pool. We were properly caught up by this point and it was really nice to be given the chance to chill after a lot of travelling.

The next day somehow I made it to breakfast before the majority and treated myself to a fry-up but also a bowl of fruit, balance is important!

Talking of balance, shortly after breakfast we were taken to our meeting room and met our outdoor instructors who told us we’d be doing abseiling and a Via Ferrata, which, to my understanding at the time, was climbing through a cave on ropes. Sounded cool to me!

Now at this point I remember Ollie (or one of the others)  joke about not being good with heights, or not being able to do it, but despite my nerves I was sure I wanted to try.

After a minibus ride down lanes that reminded me of home and that Muzi described as “feeling like a different world” we arrived at Hodge Quarry.  Chris (one of our instructors) called it the Cathedral Cavern.

After safety talks and getting our harnesses on, we arrived at the point we’d be abseiling from, two at a time. Now it felt real, up until this point I’d been confident but I could already feel my legs wobbling. I thought to myself, I need to go first otherwise my nerves will get too much. I, and the fearless Lawrence, went first. He seemed to rocket down there before I’d even gone over the edge. My instructor was called Justin and he kept encouraging me with every step I took. A few steps down and I realised it was VERY slippy and well let’s just say my gopro caught some funny moments! At the bottom I felt a sense of relief but the sense of achievement was something I haven’t experienced much of before. Shortly after, I was joined by Suhail, Razina and Muzi who all did great and seemed to love the experience. One at a time, we were joined by everyone, each with their own story of their experience, some of which made me feel lucky of mine. Initially, Eve had ended up upside down, and Ben, sliding down on his stomach, but both kept their heads and managed to complete the abseil!

After this, came an equally challenging, if not harder challenge, navigating our way up through the loose slate with a big drop to our side. I think a lot of us, myself included were mentally drained at this point, it was tough down there. However, what was really lovely about this was I could hear every single person supporting each other the whole way. Lucy and Suhail, both great instructors on their own projects, came into their own whilst helping people to the top. Once we reached the top however, we were met by puzzled looks from the instructors who stood beneath a waterfall blocking our path to the top. Moments later, one at a time, we were climbing up a waterfall.

Now I know how it feels to be scared of heights and I could see some struggling to cross the stream before the initial climb. So I thought I’d like to make it easier for them and stand in the stream to help them cross, this went down well!

Everyone was safe and sound, back on the minibus, having lunch and on the road again, this time to the Via Ferrata. On arrival we went through the same process of getting harnesses on and safety talks. Followed by a short bus journey and walk to the entrance of the mine. As a tall person, and I think some of the boys will agree, that was a back workout walking through there!

Shortly after we were climbing a ladder, clipping onto loops as we got higher and faced with a bridge, with the only place to put one’s feet, being a single rope, I was grateful for the ropes either side to put my hands! I was recording the whole thing and had seen Suhail, Lawrence, Muzi and Razina do fantastic in front of me. I was a bit unsteady at first but settled into a rhythm. I was followed by Sarah and Sam. Sarah was terrified and really working hard to push through. Words from myself and Sam and from those below, Ben, Zoe and Ollie helped, but the resilience of Sarah to keep going was amazing to see.

Slowly but surely we all navigated up and down over bridges and up ladders and then back down again. On the descent, conversations with the group and about Harry Potter from the staff Helen, Natalie and Janice were welcomed by myself, it brought everything back to reality and I was really enjoying the experience.

Once finished I was met with the group that didn’t do the Via Ferrata, all to which had said navigating their way up loose slates was really difficult, but that they had been glad to do it.

On the way back to the hotel everyone seemed exhausted, many of us were asleep but I enjoyed learning about the area with Chris. That evening we had some time to unwind and the outdoor pool and spa was welcomed after a long day. Many of us felt tired but great after a new experience.

The following morning we gave feedback on the previous day, many of us saying similar things that our experience was challenging, fun and fulfilling. We did a team enterprise task after this, two teams, a list of challenges with points, with the goal to get the most points.

The challenges ranged from taking photos of the group in leadership and social situations, to stacking a deck of cards and lego houses, to writing about who has inspired us as individuals.

The other team ended up winning, despite our team completing more tasks. We had missed out important details and therefore had point deductions, which is a lesson to take, to pay attention to detail. All in all, this challenge was great, the team worked well and everyone knew their role.

After a final evaluation, our time at this residential had come to an end, everyone was leaving feeling accomplished, what an amazing experience!